Rustic Iron BBQ est. May 2009 was initiated by word of mouth and good friends. Owner Don Baucham’s cooking career started in August 1979 at Harrigans Restaurant in Odessa, Texas. After a two year stint cooking at the restaurant, the oilfields of West Texas and South Eastern New Mexico were calling his name. Working domestically until April 2003, he took a job in Angola West Africa up until March 2013. He was then offered a position offshore Brazil and worked there until December 2015. Rustic Iron BBQ came into full-time operation in January 2016 in Terlingua, Texas.

Moving back to the Odessa/Midland area in January 2010, DB’s passion and love of barbecuing, has set up the long awaited scenario for Rustic Iron BBQ back on his home turf. In January 2016, DB set his sights on the old Mercury mining Ghost town of Terlingua, Texas, to stake his claim. He opened up there full time in January 2016, providing the Big Bend area with his slow smoked meats. DB appreciates the opportunity to be able serve West Texas and the Nation to a taste that you can never get enough of…………. 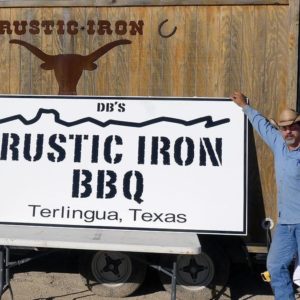 Meating All Your BBQ Needs!